Most of us know that ancient Rome was one of the first known democracies, beginning in 509 BC. But economic problems, government corruption, private armies, and the rise of Julius Caesar as emperor all led to the country's eventual demise and fall in 27 BCE.

How did Julius Caesar contribute to the collapse of democracy a thousand years ago? As you may recall, this charismatic leader and was given the title Dictator by the Senate. Later Caesar announced he was the Emperor for life and took over completely. He put on a crown of laurel leaves on his comb-over balding head and then acted the part.
The Roman Senators didn't seem to push back in public, but they did in private. Eventually they plotted a conspiracy to kill Caesar, and he was killed on the Ides of March. 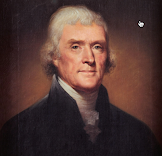 But what is most interesting to me about this history is knowing that Julius Caesar, in a later incarnation ,was Thomas Jefferson! The man who in one life initiated the fall of democracy in one country (Rome) later lives a life dedicated to creating a new democracy somewhere else! I find this very interesting and even rather remarkable.
It makes me wonder who and what Donald Trump will become in a future incarnation. Will his new future incarnation be devoted to trying to fix something he also broke or wanted to destroy? Maybe in a later life he will be in charge of Black Lives Matter.
Posted by Another-Q at 7:33 AM