"The Voice" is Using Donald's Playbook 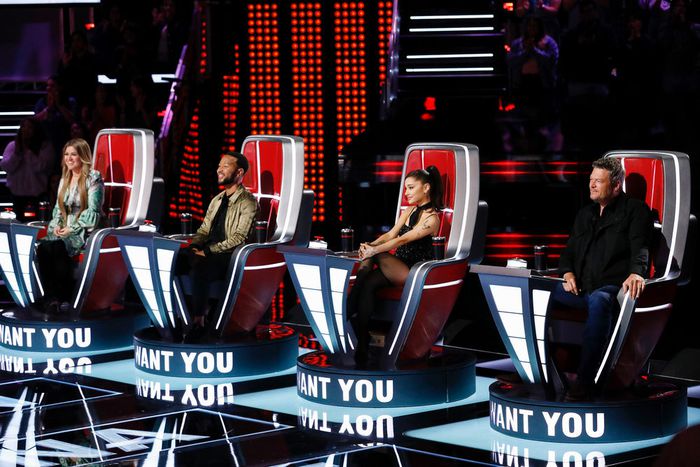 There is a singing show competition on TV called "The Voice" featuring Ariana Grande, Kelly Clarkson, John Legend and Blake Shelton as this years Coaches.
What I noticed is a slight change in format from prior years. This year they ingare instill more conflict and divisiveness between the Coaches in the show. It is as if the programing wing has decided to use Donald Trump's playbook of conflict, bullying, and lies to keep the audience engaged.
Blake Shelton has become "the Donald like figure" in this setting. His role, as the tall old rich white male, is to bully and belittle the other Coaches. He even wanders around the stage making fun of the female Coaches as if they are the new Hillary's. He will also but in and try to dominate conversations by spewing out lies or spinning tall tales aimed at dividing the judges and audience. His grandiose embellishments of his history and abilities adds to the deceit and strengthens the divisiveness. The overall goal is to improve the ratings and keep people engaged. Sound familiar?
Of course, in this reality show about singing talent, we see these antics as rather comical and whimsical. We know it is for show and isn't real.  But I also initially thought the same thing during Trump's original campaign and look what that led to? I guess I just need to face the fact that this is who we are as a society; we get pleasure from belittling others and believing in our superiority. And in the meantime, we find ourselves hooked into watching this kind of drama play out in our living room.
And as the Donald MAY have said...."It's sad, so very sad".
Posted by Another-Q at 7:15 AM